All our senior officers have been hit with the exception of Major Dupuis who seems to stick on through everything. The old battalion will no longer be recognizable.

George Elzer Alexandre Dupuis was a bank clerk born in Quebec City on 31 October 1888. He enlisted with the 57th Battalion on 18 August 1915 before transferring to the 41st in October when he departed for England. As a reinforcement lieutenant he joined the 22nd Battalion in France on 1 July 1916.

END_OF_DOCUMENT_TOKEN_TO_BE_REPLACED

Hon. Mr. W.H. SHARPE: May I ask the honourable gentleman a question?

Hon. Mr. SHARPE: At the present time the honourable gentleman’s own son is at the front fighting the battles of Canada and the Empire. I would like to ask him how he is going to meet that son when he returns to Canada?

Hon. Mr. LANDRY: That is a question of sentiment, not one of reason. My son has his ideas and I have mine.

Joseph Philippe Landry was son of Conservative Senator Auguste Charles Philippe Robert Landry (1846—1919), a strong francophone advocate and opponent of conscription. The younger Landry was born on 27 June 1870 in St. Pierre, Quebec. At the age of thirteen, he joined his father’s 61st (Montmagny) Rifles as a bugler. He became commanding officer of the 61st in 1901. In May 1915, Landry took command of the 5th Infantry Brigade in the CEF, but was replaced before it deployment to the field.

END_OF_DOCUMENT_TOKEN_TO_BE_REPLACED

As you already know, I am and have always been opposed to Canada taking part in the wars of the empire. I cannot assume the responsibility of asking Canadians to take part in a war that is not for the defense of Canada…

Let me repeat that I consider it unwise and more than criminal to place Canada in danger from a war in which we have not had, have not and will have any control…

Armand Lavergne had been Liberal MP for Montmagny (1904—1908) and, early in his political career, was a follower of Wilfrid Laurier. Born on 21 February 1880 in Arthabaska, Quebec, he was also rumored to be Laurier’s illegitimate son. In 1907, Lavergne broke with the Liberal Prime Minister and was expelled from the party caucus. A passionate defender of French language rights, he became lieutenant to Nationalist leader Henri Bourassa. From 1908 to 1916, Lavergne sat as a Ligue nationaliste canadienne member for Montmagny in the Quebec legislature.

Despite his Nationalist ties, Lavergne was active in the militia and a strong advocate of home defence. When the First World War broke out, he was the commanding officer of 61st  (Montmagny) Rifles. In 1915, Militia Minister Sam Hughes offered a commission in the CEF to command a French Canadian battalion but Lavergne steadfastly refused out of principle. He nevertheless conceded that as a solider he would obey his superior’s orders if compelled to fight. However, Hughes respected his friend’s conviction and even defended him in parliament.

END_OF_DOCUMENT_TOKEN_TO_BE_REPLACED

I wish every young man in Montreal would follow the example of the Highland Cadets, and occasionally, at the close of their day’s work put on uniforms, as you boys do and come down to train for work as real soldiers of the King instead of idling away their time on the streets as I see so many doing.

Born on 2 January 1883 in Quebec City, Etienne Theodore Paquet was a member of an old, influential Quebec family and the son of a prominent Conservative politician of the same name. The younger Paquet was an official in the federal postmaster general’s office, a barrister and Inspector of Cadets for the province of Quebec. He was also a member of 17th Regiment for fifteen years before the Great War.

END_OF_DOCUMENT_TOKEN_TO_BE_REPLACED

Let me start with the bad news: Major Dubuc was wounded again today by the explosion of a rifle grenade … The major bled profusely, which I think is a very good sign but did not lose consciousness. In fact he even retained his usual good humour … The Major has had wonderful luck in each of his misfortunes. To be wounded twice in the head and to come through is simply marvelous.

Born on 18 May 1880, in Sherbrooke, Quebec Arthur Édouard Dubuc was a civil engineer in the Department of Public Works. A member of the Corps of Guides since 1908, he enlisted as a captain with the 22nd Battalion in November 1914.

END_OF_DOCUMENT_TOKEN_TO_BE_REPLACED

Don’t you think, Sir, that the fact of leaving my family (I am the father of five children) and position is one sacrifice that should count for something? Furthermore, the sudden disbanding of my Battalion will certainly seriously hurt my reputation not only in the military life but also in the civil.

Born on 28 October 1888 in Fraserville, Quebec, Philippe-Auguste Piuze was a militia captain in the 89th Regiment. Commanding officer of 189th Battalion, the twenty-eight year old lieutenant colonel was one of the more successful recruiters in Quebec. “I was anticipating my Battalion to go to the front as a draft, although I was promised it would go as a Unit,” he wrote on arrival in England. Instead, his battalion was taken from him almost immediately after disembarking.

END_OF_DOCUMENT_TOKEN_TO_BE_REPLACED

Born on 15 December 1869 in Saint-Louis-de-Kent, New Brunswick, Louis-Cyriaque D’Aigle was an agronomist and dairy farming magnate. Although he did not have any military or militia experience, D’Aigle was appointed commander of the 165th Battalion based in Moncton.

END_OF_DOCUMENT_TOKEN_TO_BE_REPLACED

I know I deserve to be punished for a breach of discipline, but all I ask from you, gentlemen, is not to be prevented from doing what I wanted to do, namely, going to the Front. If you dismiss me from the service it will be quite impossible for a commanding officer to join the ranks as a private.

Born in 1870, Tancrède Pagnuelo was a Montreal barrister and Conservative Party activist. He had unsuccessfully contested the riding of St. James in the 1900 federal election. A reserve officer with the 85th Regiment, Pagnuelo was appointed to raise the 206th Battalion from the districts of Beauharnois, Laprairie and Terrebonne in early 1916. He would prove to be one of the more unfortunate choices.

END_OF_DOCUMENT_TOKEN_TO_BE_REPLACED 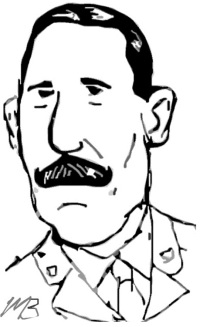 Colonel Harwood, who had hoped, I say, to add some credit to the family to which he belonged by rendering military service to Canada and the Empire, and who was no doubt competent in every way to render that service, was relieved of the command of his battalion; it was broken up into drafts, and Colonel Harwood has been given employment as a medical officer in England.

The cruelty of that is, that so long as Colonel Harwood lives or his children after him, instead of his service to the country brining credit or glory to his name, there is a stain against him from which he can never relieve himself.

Born on 27 March 1872 in Vaudreuil, Quebec, Reginald deLotbinière Harwood was a member of a distinguished and influential Lower Canadian family. He was the descendant of the Marquis de Lotbinière (1723–1798), a French-Canadian seigneur, military engineer and general in the Seven Years’ War.  After completing his medical education in Montreal, Paris and London, Harwood became a surgeon in Edmonton.

END_OF_DOCUMENT_TOKEN_TO_BE_REPLACED

Sir Wilfrid Laurier: I cannot give him a better answer than this: Mr. Blondin took off his coat—

Sir Wilfrid Laurier: I stand corrected. There are so many colonels in this country that I had forgotten one. I am blessed with a pretty good memory, but there is a limit even to counting, and I do not know whether the ex-minister himself knows how many honorary colonels he has appointed. But let that pass.

Pierre Édouard Blondin was Conservative MP for Champlain and prominent French-Canadian minister in the Borden Cabinet. He was born on 14 December 1874 in St-François du Lac, Quebec. First elected to parliament in 1908, he became Minster of Revenue in 1914 and Secretary of State in 1915 before being appointed Postmaster General.