Sir Wilfrid Laurier: I cannot give him a better answer than this: Mr. Blondin took off his coat—

Sir Wilfrid Laurier: I stand corrected. There are so many colonels in this country that I had forgotten one. I am blessed with a pretty good memory, but there is a limit even to counting, and I do not know whether the ex-minister himself knows how many honorary colonels he has appointed. But let that pass.

Pierre Édouard Blondin was Conservative MP for Champlain and prominent French-Canadian minister in the Borden Cabinet. He was born on 14 December 1874 in St-François du Lac, Quebec. First elected to parliament in 1908, he became Minster of Revenue in 1914 and Secretary of State in 1915 before being appointed Postmaster General.

As recruitment slowed to a crawl in Quebec, Blondin and General François Lessard attempted to renew volunteer enlistment in the province. The cabinet minister offered his resignation in April 1917 to become commander of the 258th Battalion, the last numbered volunteer unit.

In an open letter to his constituents, Blondin explained:

As long as the heavy responsibilities of office made it an imperative duty for me to remain at the post you had assigned me, I resisted a desire I had long entertained of going to the front with those of my age and race who, to the honor of the Province of Quebec are offering their blood for the defence of rights and ideals which we are among all interested in maintaining in the world.

Throughout the spring and summer of 1917, Blondin went on a speaking tour of the province. At a recruitment rally in Saint-Hyacinthe, Liberal Mayor René Morin admitted, “It is an undeniable fact that our English compatriots have done more than we have done.” Blondin called on the audience to view the war as the preservation of Confederation. Despite initial press confidence and enthusiasm, Blondin’s effort failed as he enlisted only a tiny fraction of men. When the 258th departed overseas in October 1917, Blondin accompanied just over two-hundred volunteers to England. The enforcement of conscription ended the volunteer battalion system. 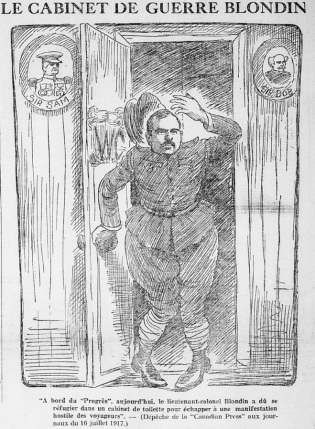 In the context of growing anger in Quebec toward the Borden Government and aggressive opposition to conscription, Blondin was the target for attack and mockery by some Liberal and Nationalist critics. One newspaper, L’Événement, complained that Blondin “has been attacked both in private and public life, as well as in his honor, using against him all that blackguardism which can be discovered no where else except in the dirtiest sewers.”

He was defeated in the riding of Laurier—Outremont during the December 1917 federal election. Although he received 1,341 soldier ballots compared to 180 for his opponent, it was not enough to make up the difference in the civilian vote.

Blondin was appointed to the Senate eight months later and served as speaker of the upper chamber from 1930 to 1936. He died in office on 29 October 1943 at the age of sixty-eight.

For more about Canadians MPs who served in the First World War, see: “‘Natural leaders of a democratic army’: Parliament goes to war,” British Journal of Canadian Studies (2017): 23-44