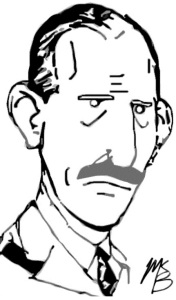 We recruited more than three thousand men here, and could have gotten as many more had not the Government put an end to voluntary enlistment by throwing a political monkey wrench into the machinery.

It was for the same reason that the county battalions, one of which I took to England, were broken up into drafts for other units.

Thomas Baird Welch was a chemist and commanding officer of the 26th Middlesex Light Infantry. He was born on 10 April 1867 in Kilwinning Scotland. He went overseas with the First Contingent in October 1914 and served as a major with the 1st Battalion in France from April to May 1915. He joined the 1st Division command staff until he returned to Canada in December 1915 to raise the 99th Battalion.

He returned to England with his new command in May 1916. The 99th was broken up and absorbed into the 35th Reserve Battalion. Deemed surplus to requirements, he was sent back to Canada, where he took command of a mobilization centre in Windsor.

Shortly before the December 1917 federal election, Welch dropped a “political bombshell” when he resigned his post and denounced the Borden Government. In a speech on 6 December, he endorsed the Laurier Liberal candidate William Costello Kennedy in the riding of Essex North.

Critics labelled the former 99th command as a “Quit-the-war” and “done enough” colonel. In response to partisan attacks that equated opposition to the government with treason, Welch reaffirmed his patriotism stating, “I reserve the right to cast my vote according to the dictation of my conscience.”

Due in part to Welch’s surprise endorsement, Essex North was one of the only Liberal victories in a Union-held seat outside of Quebec. Kennedy narrowly defeated Lieutenant Colonel E. S. Wigle, former commander of the 18th Battalion, by less than 500 votes.