… I am afraid we have had in the past, officers placed upon the general staff in time of trouble who are a long way better fitted to carry a constituency or empty a bottle of good Canadian rye in the morning.

Born in Toronto in 1859, Septimus Junius Augustus Denison was the brother of Colonel George Taylor Denison III and member of Canada’s most prominent military family. A graduate of the Royal Military College, he served for twenty-five years with the Royal Canadian Regiment and was aide-de-camp to General Lord Roberts during the Boer War.

In an 1898 lecture criticizing a mandatory retirement age for militia officers, Denison stated, “When an officer is placed on the retired list he feels himself to be more or less, from a military standpoint, a dead man.” 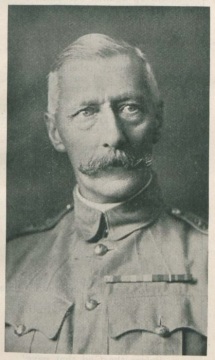 “In case of serious trouble,” he argued, “old men would have to fight again, as they did in 1812.” Seventeen years later on the outbreak of the Great War, the fifty-six year adjutant general of the Canadian militia hoped to do just that when he was appointed to command the 4th Infantry Brigade.

However, suffering from ill health, Denison was subsequently relieved of duty in June 1915 and replaced by Lord Brooke, who led the 4th Brigade to the front. Denison returned to Canada, was promoted to general officer and retired on a pension.

He spent his retirement years living part-time in Bermuda. He died in Toronto on 8 November 1937.