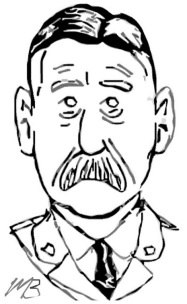 Robert McDonnell Thomson, officer commanding the 43rd Battalion, who died at Albert. France, Oct. 8 1916, as a result of wounds, and who was believed to be one of the wealthiest men in Winnipeg, died insolvent.

Born on 4 July 1869 in Hamilton, Ontario, Robert McDonnell Thomson was a veteran of the 1885 Rebellion and founder of the 78th Cameron Highlanders of Canada. Although on the reserve list at the outbreak of the Great War, Thomson raised the 43rd Battalion from Winnipeg and sailed for England in June 1915. The Cameron Highlanders deployed to France with 9th Infantry Brigade, 3rd Division in February 1916.

On 8 October 1916 at the battle of the Ancre Heights, an exploding shell seriously wounded Thomson. He ordered Major William Grassie to take command before being taken to a first aid post. While being transported by horse ambulance, he was struck by a second shell and killed.

Prior to his death, Thomson had bequeathed a fund of $200,000 to his wife and $25,000 to each son. However, the executors of the will found that the Thomson estate was heavily in debt. In 1934, his vacant Winnipeg mansion was demolished.

3 thoughts on “The Bankrupt”