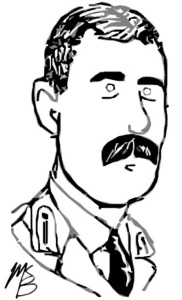 Spare of figure, short of stature, with an almost ascetic type of face, a trait which was accentuated rather than disturbed by the scar on the cheek received when he was mauled by a leopard in a big game hunt in Somaliland, the original Commanding Officer of the 16th was of a reserved disposition, even shy. In action he was cool and observant; he talked, and gave his orders, in a conversational tone. He showed not the slightest sign of irritation; and what such a temperament means in battle only the soldiers who have been through the turmoil of it can truly estimate.

Born in Halifax on 4 June 1869 Robert Gilmour Edwards Leckie was a soldier and mining engineer in British Columbia. He graduated from the Royal Military College, served in South Africa and Somaliland, and organized the 72nd Seaforth Highlanders in 1910. During a safari on the Somaliland frontier in 1904, a wild leopard attacked him. Of the incident Leckie explained, “I brought the skull and skin home with me.”

After the outbreak of the Great War, Leckie led the 16th Canadian Scottish from Valcartier through the battles on the Ypres Salient during the spring of 1915. Following his promotion to brigadier general with the 3rd Brigade in August, command of the 16th passed to his younger brother Major Jack Leckie, a fellow RMC graduate and Boer War veteran. Unlike his outgoing and adventurous brother, Robert had been a calm and reserved commander. Lieutenant Colonel Hugh Urquhart, chronicler of the 16th Battalion, observed, “this reticence and shyness… were thought to be the aloofness of superiority, an impression which Colonel Leckie knew only too well existed.”

On 17 February 1916, a German sniper shot Leckie in the leg, severing a main artery. Requiring months of recovery, he was replaced by Brigadier General Loomis. In December 1916, Leckie was appointed to the command headquarters at Witley. He went on one last tour of the front in February 1917 before being recalled to British Columbia to take over No. 11 Military District in Victoria.

Urquhart related, “For his contribution to the building up of Canada’s military reputation and the many years of Militia service he gave to his country, the Dominion should honour the memory of Major-General Leckie.”

One thought on “The Quiet Man”