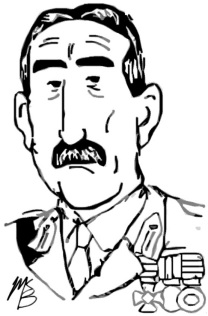 Theirs was not a spectacular adventure.

Modern warfare had lost that glamour which in centuries past stirred the imagination of peoples. When whole nations are aligned on the battle fields in a long mass of muddy burrows, war becomes horribly monotonous, yet officers and privates faced the same dangers and they shared the same fate.

Born in Toronto on 6 February 1868, Archibald Hayes Macdonell was a decorated professional soldier and veteran of multiple British imperial adventures in Africa. He had fought in the Boer War, the Aro Expedition and military operations in Nigeria with the West African Frontier Force. During the South African campaign, he had briefly been taken prisoner by Boer General Christian De Wet and earned the Distinguished Service Order.

In addition to his military interests, he was a keen sportsman and hunted big game throughout the Empire. A senior officer with the Permanent Force Militia, Macdonell assumed command of the Royal Canadian Regiment in the field from November 1915 to April 1916.

On 26 April 1916, he was promoted to take over the 5th Infantry Brigade from Major General David Watson. Macdonell remained with the brigade until July 1917. Suspected to be suffering from the mental strain of war, he was subsequently relieved to base duty.

After the war, he became honorary colonel of the R.C.R. and was promoted to major general in command to No. 7 Military District, New Brunswick. He succeeded his ailing brother, Angus Claude Macdonell, as senator for Toronto South in 1921. He voiced support for generous allowances to ex-soldiers but often delayed voting on the pension bills. He explained, “I am opposed to hurried legislation. Bills come rolling in here ten deep in the last few hours of the Session, and we are expected to railroad them through—I think that is the favourite term here.”

Senator Roaul Dandurand recalled that the general had “participated in our debates on matters related to the subject nearest to his heart: the defence of Canada and of the Commonwealth.” Arthur Meighen eulogized:

I had a very high regard for General Macdonell. He was a most excellent officer and a gentleman in every sense of the word. In all my association with the General I never knew him to say an unkind thing about any person. Even about his enemies, if he could not say a good word he had the tact to say nothing.