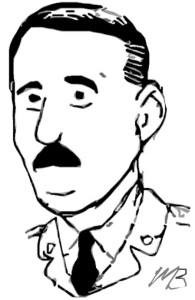 General Matthews had been one of ray closest friends since the First Great War. We are going to greatly miss his advice and help at National Defence Headquarters. He was a man with a most lovable character, who was friendly with people and in turn inspired their friendship. In France and Belgium he was a first class fighting man and in peace-time he was also a first-rate officer. Few officers in either peace or war were more efficient.

Born on 22 May 1877 in Lower Harford, England, Harold Hallord Matthews immigrated to Vancouver in 1894. He became a cattle rancher and joined the British Columbia Horse. He fought in France with Louis Lipsett’s 8th Battalion until he was wounded at Second Ypres in April 1915. He rejoined his unit five months later and was appointed commanding officer on 28 September 1915 following the elevation of Lipsett to the 2nd Brigade.

Matthews lead the 8th through the action at Mont Sorrel in early June 1916. While Matthews and his headquarters staff conferred with Lieutenant Colonel Frank Creighton of the 1st Battalion, the dugout was hit by a heavy German shell. Creighton and two 8th Battalion officers were killed while four more were injured. Matthews suffered wounds to his head and back. With Matthews invalided to England, command of the 8th passed to Major K. C. Bedson.

Following a promotion to full colonel, Matthews assumed headquarters staff positions in England and France. After the war, he remained active in the militia and pursued a professional military career. In 1938, he was appointed Adjutant General. He died on 12 May 1940 due to the strain of organizing military preparations and mobilization during the early months of the Second World War.