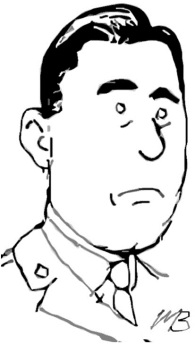 I would appeal for a greater measure of co-operation between the two great parties during the grave crisis through which our Empire is passing. When victory of democratic communities is achieved over the forces of autocratic despotism, represented by Kaiserism, then and not till then, let our political warfare again be waged…

Hadley Brown Tremain was a barrister and Conservative MP for Hants (1911—1921). He was born in Port Hood, Nova Scotia on 23 October 1874. He attended Windsor Collegiate and Kings College before receiving a Ph.D. from Harvard in 1899. He defeated Liberal MP Judson Burpee Black in the 1911 election. After the outbreak of the Great War, Tremain endorsed a party truce, arguing that after the crisis there would “be time enough to re-engage in part recrimination and strife in this country.”

Although Tremain admitted that some mistakes had been made by the Militia Department in organizing the war effort, he defended Minister Sam Hughes, “on whose shoulders has rested a burden far too heavy for shoulders of many of his uncharitable critics.”

In November 1915, Tremain was authorized to raise the 112th Battalion from Nova Scotia. It sailed for England in July 1916 and was absorbed into the 26th Reserve Battalion. After the loss of his command, Tremain transferred to the office of overseas minister, Sir George Perley. He performed special duties in France and joined Prime Minister Borden’s tour of the front in May 1917.

In the December 1917 election, Tremain narrowly lost the civilian vote to Laurier Liberal Lewis Herbert Martell. However, the soldier vote saved the former 112th commander. With 514 votes added to his total compared to only 55 for his opponent, Tremain secured a majority of just under 300.

He returned to Canada in January 1919 as the conducting officer on the S.S. Scandinavian, which was transporting families and returned soldiers. When the ship docked, Tremain filed a critical report describing the “unsatisfactory” conditions onboard. Two soldiers and two civilians died on the voyage. Tremain recommended increased nursing and steward staff and called for special accommodations for the women and children.

He retired from politics in 1921. Tremain made an unsuccessful comeback attempt during the Second World War as a National Government candidate in the 1940 election.