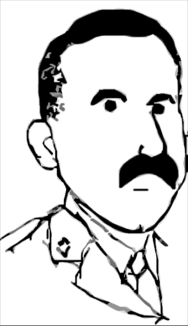 … one of the best things which would result from the war would be the associations which had been formed overseas. [McCausland] could not agree with some people who took the view that the men should hustle back into civilian life and forget all.

A Toronto native, Alan Joseph McCausland was born on 9 June 1887. He enlisted as a private in the Queen’s Own Rifles in 1903. At the outbreak of the war in 1914, he was a militia captain with the 36th Peel Regiment. At the age of twenty-eight, he was one of the youngest battalion commanders. He led the 74th overseas in March 1916, but the unit was subsequently broken up in England to provide reinforcements.

He reverted in rank to serve in the field. Following frontline service in France, McCausland returned to Canada to become commanding officer of 2nd Deport Battalion, 2nd Central Ontario Regiment. He presided over the court martial of contentious objectors and others who defied conscription.