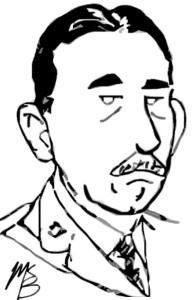 I would like to sound this note of warning. This war has united the soldiers into the most powerful force for good or evil in this country. If we use this force to promote our own selfish purposes we will have forgotten the high ideals for which we fought.

A native of Toronto, John Alexander Gunn was born on 5 August 1873.  He had first joined the Queen’s Own Rifles in 1897 but transferred to the Victoria Rifles when he moved to Montreal in 1901. In October 1914, Gunn was appointed to command the 24th Battalion. At a reception before he departed overseas with his unit, Gunn defended the war as a just cause: “It means the triumph of honor, or of dishonor; the preservation of centuries of progress or a reversion to brutal militarism with its battle cry of iron and blood– in fact the whole future of the human race is at stake.”

Due in part to a tense relationship with his superior officer, Brigadier General David Watson, Gunn relinquished command in October 1916. He later condemned Watson, writing, “through bad judgement and looking for kudos, cost the lives of many Canadians.”

In 1918, Gunn took command of No. 2 Military District in Toronto and devoted himself to the needs of returning veterans. He was also elected to head the Canadian Legion for a number of terms in the 1920s and 30s. Gunn specifically helped amputees, arguing that those who had suffered through the war should not have to face the problem of unemployment.

Although he recognized the value of popular sympathy, Gunn warned fellow veterans not to rely so heavily on public support “as to destroy your self-reliance.” Concerned about veterans’ readjustment to civilian life, Gunn explained that the average soldier’s “training had been to think of nothing but killing the Boche. Every other thought had as far as possible been excluded from his mind.”