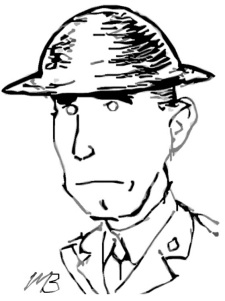 Early in the day, before the attack, and again in the afternoon, he made personal reconnaissances over fire-swept ground, gaining first-hand information which enabled him to handle his men and direct the fire of his guns with remarkable success. His fine leadership, coolness and disregard of danger, carried his men along with him.

On 24 May 1918, Eric Whidden MacDonald became the youngest battalion commander in the Canadian Expeditionary Force. He was born in Amherst, Nova Scotia on 20 July 1892. He moved to Calgary in 1913 to become an accountant with the Canadian Oil Company. He enlisted with the 10th Battalion in September 1914.

He rose through the ranks and proved himself in battle, earning the Distinguished Service Order and Military Cross. He assumed command of the 10th in late May following the promotion of Dan Ormond to brigadier general. By the end of the war, he had won a D.S.O. Bar and been four times mentioned in dispatches.

MacDonald returned to his native Nova Scotia after the war and became commissioner of the provincial police. He was later supplies director for the Royal Canadian Army Service Corps in Halifax and took a civil service position with the Department of National Defence in Ottawa.

He died from a gunshot to the head on 12 November 1947. Police suspected he had accidentally shot himself while cleaning his Webley service revolver.