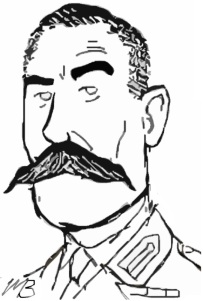 Gather round, boys, I want to have a little talk with you. You’ve been under my command about nine months now, and I’ve always been proud of you, and now you are going up the line, and I want to say this to you: Don’t go up with any idea that you are going to be killed—we want you all to take care of yourselves and not expose yourselves recklessly.

And remember a dead man is no use to us, we want you alive, and when we want you to put your heads up, we’ll tell you! And I’ve no doubt that you will only be too eager.

The son of an Indian Army officer, Huntly Douglas Brodie Ketchen was born in Sholopore, India on 22 May 1872. After graduating from the Royal Military College in Sandhurst, England, Ketchen moved to Canada, joined the North West Mounted Police in 1894 and fought in the Boer War. He was appointed to lead the 6th Infantry Brigade in May 1915.

The 6th Brigade, comprising the 27th, 28th, 29th and 31st Battalions, deployed to France in September 1915. Although the British urged his removal following tactical errors at the battle of St. Eloi craters in April 1916, Ketchen retained his post for another two years. Replaced by Lieutenant Colonel A. H. Bell in April 1918, he returned to Canada to take over No. 10 Military District.

As commanding officer of the Militia in Winnipeg, Ketchen assumed a leading role in confronting the General Strike in May 1919. He felt, “behind all this trouble there is a well defined element of socialistic and bolshevist tendencies.” Mistrustful that the city police would side with the strikers, he attempted to raise a special force of veterans and citizens in the event of unrest. He retired from the militia in 1929.

A Conservative Party leader in Winnipeg, Ketchen served three terms in the Manitoba legislature from 1932 to 1943. When the Conservatives joined a coalition of Liberals and Progressive in 1941, Ketchen ran as an independent and served as Opposition leader during his final term.