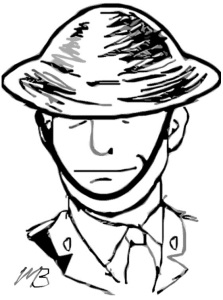 Mr. Rutherford asked: …whether, seeing that this is his only remedy in cases where such officer’s immediate superiors have formed opinions which are not well founded, and would be disproved at once if the case came before officers of higher rank entitled to form their own judgment and hear the evidence and the explanations of the officer in question, he will state why a Court of inquiry is being withheld from Lieutenant-Colonel G. C. Hodson, D.S.O.

George Cuthbert Hodson was born in New Shoreham, England on 21 July 1879. He was a bank manager in Lloydminster, Saskatchewan,  a veteran of the Boer War and commanding officer of the 22nd Horse. In December 1914, he organized the 9th Canadian Mounted Rifles, which was used for reinforcements with the Canadian Cavalry Reserve Depot in England.

While stationed at Grayshot, England in February 1916, a 9th CMR soldier was found “terribly mutilated” in a stable. Hodson identified what was left of the body as Sergeant Henry Marquis Ozanne. Lieutenant George Codere of the 41st Battalion was quickly arrested for the murder.

At the trial, Hodson testified to Ozanne’s good conduct and indicated that the motive for murder had been a financial dispute. Witnesses explained that Codere had killed Ozanne in order to steal the 9th Rifles’ canteen funds. Many of the 41st officers including Lieutenant Colonel Louis Henri Archambault, considered “Crazy Codere,” completely insane.

In June 1916, Hodson moved from the Canadian Cavalry Depot to take command of the 1st Western Ontario Battalion after the death of Lieutenant Colonel Frank Creighton at the battle of Mont Sorrel. Within a year, Hodson had received the D.S.O. on 4 June 1917 but was suddenly removed from command during the battle of Hill 70 on 16 August 1917. Major Albert Sparling of the 10th Battalion took his place.

Concerned about the standing of aggrieved officers, British Conservative MP, William Rutherford, questioned why Hodson had been sacked and subsequently denied a court of inquiry to defend his reputation. When asked if he knew Hodson’s record as an officer, Under-Secretary of State for War, Ian Macpherson, explained the disposal of personnel was the responsibility of general officers but added:

I am glad to say that there are at the present moment officers serving in the Army who have re-established themselves in the esteem and respect of their fellows by regaining their commissions.

Hodson evidently did not regain the esteem of his fellows. Ordered to resign his commission, he returned to Regina disappointed and bitter. His direct appeals to General Arthur Currie in March 1918 failed to improve his situation. Sometime after the war, he moved to California and became a naturalized American citizen in 1927.