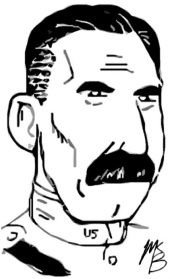 Rasmussen was a big, handsome man; fearless in war and pitiless to four-flushers anywhere, any time.

“But so far I’ve always found that a man has time to get down to avoid the fragments— if he moves fast. If it’s got your initials on it— well, no one but a prime so-and-so wants to live forever!”- Maj. Rasmussen

Axel Thorvald Rasmussen was one of the American Legion’s most famous members. The thirty-eight year old, Danish-born resident of Oregon was a veteran of the Spanish-American War and the Philippine Insurrection. During the Mexico Revolution, he fought in support of General Obregón’s army. Regarding his previous fights as “mere skirmishes,” in 1916, Rasmussen traveled to Canada in order to join Lieutenant Colonel Wade Jolly’s 97th American Legion.

As American newspaper reporter J. W. Pegler noted, “The legion had troubles galore. There were bums and deserters and just plain thieves who enlisted to draw the pay… One day ‘Rass’ was a private and a week later he wore a major’s crown.” 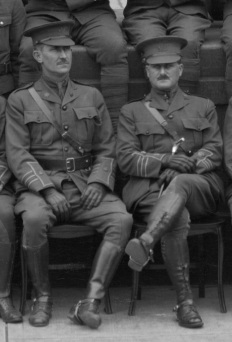 After the 97th was disorganized in England, Rasmussen joined Princess Patricia’s Canadian Light Infantry in December 1916. The six-foot-one Scandinavian distinguished himself in battle by leading several dangerous raids against German trenches. “The idol of his men because of his fearless,” in October 1917, he transferred to the American Expeditionary Force as a bayonet instructor. By January 1918, he was commander of the 28th Infantry Regiment in 1st American Division.

On 4 May 1918, an enemy shell struck the command headquarters, leaving Rasmussen seriously wounded. Although a medical officer believed that the injury was not serious, Rasmussen disagreed and died. His last request was for a funeral “with all that goes with that.” He was posthumously awarded the Distinguished Service Cross.

…for extraordinary heroism in action at Rocquencourt, France, May 4, 1918. Major Rasmussen proceeded to his post of command in spite of heavy bombardment in order to save important papers and while thus engaged was killed by shell fire.

According to Edward Scott Johnston, a veteran of the 28th Regiment, the loss of Rasmussen was a “soul searching experience” for everyone from privates to generals. All wondered “If this man can be slain, who can escape?”

After the funeral, Johnston explained that Rasmussen’s “dearest pal, another ‘Canadian,’ mourned in silent dry-eyed anguish at his grave, and lived—a man alone and shaken—till the light Maxims set him free. Yes, like the kings of old, the Major even took with him a human sacrifice—a willing—sacrifice to Valhalla.”