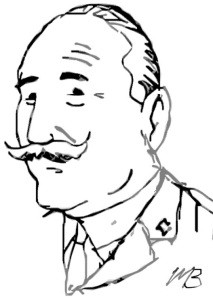 “Actual demonstration of the wonderful ability of the Overland cars in the rear of the trenches of the allied nations caused me to buy an Overland.” said Colonel McAvity, 26th Battalion, St. John, N.B., Just after one of the new Overland models was delivered to him by J. A. Pugnley, Overland dealer at St. John. Colonel McAvity recently returned home on a short furlough, and in order to get the most out of his, brief leave of absence purchased a motor car.

James Lupton McAvity was born on 8 October 1867 in Saint John, New Brunswick. He began his career with the family manufacturing business, T. McAvity & Sons Ltd. in the mid-1880s. His position as a company manager and representative took him to western Canada, Chicago and New York. During the gold rush of 1897, he traveled to Alaska and the Yukon in search of his fortune.

As commanding officer of the 62nd Fusiliers Regiment, McAvity organized the 26th Battalion from New Brunswick in spring 1915. The 26th deployed to France in September 1915 as part of the 5th Infantry Brigade in the 2nd Division. Suffering from gastritis and insomnia, McAvity began displaying nervous symptoms, tremors and fidgeting. On 29 May 1916, Major A. E. G. McKenzie took over the 26th and McAvity returned home that summer.

In spring 1919, while in command of the 1st New Brunswick Depot Battalion at Camp Sussex, McAvity and several officers came under a cloud of scandal. Suspicions over a shortage of canteen funds led military officials to charge the colonel and his staff with conspiring to defraud the battalion.

On 2 May 1919, authorities arrested McAvity along with his alleged conspiracy ring of Major F. H. Rowe, Captains G. Earle Logan and R. Ingleton, Lieutenants Stockwell, Simms and Belyea and Sergeant-Major Rawlings. During the court-martial proceedings, McAvity denied any knowledge of the fraud and claimed to have reimbursed the battalion out of his own pocket. General Archibald H. Macdonell, formerly of the 5th Brigade, testified to the good character of the defendant, asserting that McAvity would never do anything dishonourable.

The court martial board, presided by Brigadier General V. A. S. Williams, handed down its decision on 10 June. Major Rowe was severely reprimanded. Captain Logan was dismissed from the service. Rawlings was demoted. Lieutenant Belyea received a six-month prison sentence. As the supposed ringleader of this nefarious cabal, McAvity was cashiered.

4 thoughts on “The Ringleader”