I was importuned, threatened and bullied. I was told that Garnet Hughes would get the 1st Division, that there was a combination in England and Canada for him, that neither I, nor any man could beat; that his father wanted him to get the position and that God help the man who fell out with his father.

Garnet Burk Hughes was the son of Militia Minister Sir Sam Hughes. Born in Toronto on 22 April 1880, he was a graduate of the Royal Military College of Canada and a railway engineer. In 1913, he formed the 50th Regiment (Gordon Highlanders) with Arthur Currie. Although Hughes and Currie volunteered together in August 1914 on good terms, their friendship would not survive the war.

END_OF_DOCUMENT_TOKEN_TO_BE_REPLACED 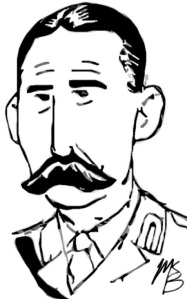 It is now fully believed here that General Mercer is dead.

Nothing whatever has been heard of him since and it is now considered almost certain that his body lies in the shell torn area where the former front trenches were, but are now practically obliterated.

Malcolm Smith Mercer was the highest ranked Canadian officer killed in the First World War. He was born on 17 September 1859 in Etobicoke, Canada West. While a student at the University of Toronto, he joined the Queen’s Own Rifles in 1881. He became commanding officer of the Regiment in 1911 and was posted to the 1st Infantry Brigade when the First Contingent assembled at Valcartier in August 1914.