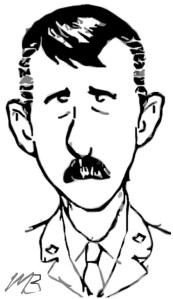 Your colonel is peculiarly fitted by temperament, training and tradition
to lead a “kilted” battalion to victory. In his veins there flows the blood of that ancient clan whose proud boast it was “that despite their enemies, the McGregors should flourish forever.” In him we have combined the indomitable spirit of the Scottish Highlander, the bulldog tenacity of the English, and the resourcefulness and initiative of the Canadian. He will lead you to victory. Stand by him like a “stone wall” in the days to come.

The son of Liberal MP and prominent businessman William McGregor (1836—1903), Walter Leishman McGregor was born 30 April 1875 in Windsor, Ontario. In 1904, Walter had supported his older brother Gordon (1873—1922) in forming a partnership with Henry Ford and creating the Ford Motor Company of Canada.

Walter was an officer in the 21st Essex Fusiliers and had married the daughter of commanding officer Ernest S. Wigle in 1912. McGregor assumed command of the militia regiment after his father-in-law departed with the 18th Battalion in September 1914. In summer 1916, McGregor was authorized to raise the 241st from the Windsor area.

Many of the volunteers were Americans recruited from across the border. Colonel William T. Gregory, an eccentric North Carolina tobacco businessman with a curious enthusiasm for the Canadian war effort, worked as a recruiter for 241st as well as the American Legion. Addressing the battalion before it departed overseas in April 1917, Gregory declared:

I am more than proud when I recall the fact that within the ranks of the 241st Battalion, wearing the King’s uniform, are to be found many Americans—Roosevelt Americans who, thank God, were “too proud not to fight.”

The 241st was absorbed into 5th and 12th Reserve Battalions in England. McGregor reverted in rank and served as a staff officer with the British First Army. During the December 1917 federal election, McGregor broke with his Liberal family tradition to endorse the Unionist candidate in Essex North, his former militia commander and father-in-law, Colonel Wigle. The Laurier Liberal candidate, William Costello Kennedy, who was supported by his brother Gordon McGregor, narrowly defeated Wigle.

After the war, Walter McGregor returned to Windsor and remained active in his family’s business affairs. Upon Gordon’s death in 1922, Walter became executor of his estate. He later served as president of the Canadian Chamber of Commerce and died on 21 April 1933.