Another thing, if they are going to break up battalions. It is not fair to the men who go over there as colonels and majors; it cast a slur upon them. They are left stranded in England and we are put to the expense of keeping them there. If they are discharged and sent back, a slur is put on them. I say that is not fair.

William Thomas McMullen was commanding officer of the 22nd Oxford Rifles and a member of Loyal Orange Lodge No. 93. Born on 29 January 1863 in Woodstock, Canada West, McMullen was solicitor and master of courts in Oxford County. In December 1915, the militia colonel was authorized to raise the 168th from his home county. 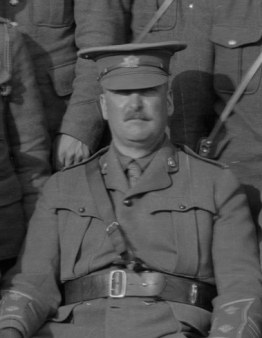 The 168th sailed for England in October 1916. When the battalion was broken up in January 1917, the colonel returned to Canada. One of his former soldiers commented on the departure of McMullen and the other senior officers, “I guess they had cold feet.”

Liberal MP for Oxford North, Edward Walter Nesbitt, defended the reputation of surplus senior officers like McMullen. He criticized the Government’s recruitment strategy and the policy of granting too many officer commissions:

…nine out of ten of these colonels and majors enlisted in good faith, believing that they would go to the front to fight for their country’s cause, and a slur is put upon them when they are not sent to the front. I know that to be a fact.

McMullen’s nineteen-year son Robert Gascoigne, who had enlisted as a captain with the 168th joined the Royal Flying Corps after the breakup of his father’s command. Following several months in the sky, father and son were reunited when Robert returned to Woodstock on leave in summer 1917.

After the war, Colonel McMullen participated in 168th Battalion reunions and memorial events. At the unveiling of a cenotaph in Tillsonburg, he declared, “The great aim of the people now is to bring about perpetual peace, when nation shall not lift the sword against nation.”

One thought on “The Oxfordian”