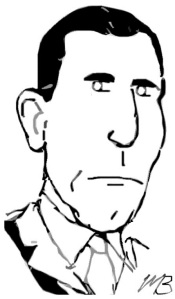 The letters from the regiment after his death read, “The men would follow him anywhere; he seemed to bear a charmed life.” Yet what was his life until the War gave him his chance? A life of adventure wearing down into plain middle-aged failure.

Born on 14 December 1874 in Halifax, Charles James Townsend Stewart was a North West Mounted Police constable, sportsman, soldier, womanizer and all-round lovable scoundrel. After being expelled from the Royal Military College for gambling in 1892, he moved back to Halifax before joining the NWMP in 1896. After he was kicked out of the police for bullying and bad behaviour, he drifted throughout the Northwest and the Yukon. A veteran of the Imperial Yeomanry during Boer War, Stewart joined the P.P.C.L.I. as a lieutenant in August 1914.

His friend, Lieutenant Talbot Mercer Papineau described Stewart as having the vitality and appearance of Hercules.” Papineau further noted that his friend was an expert card player, heavy smoker and would drink “the output of a whiskey factory.”

Wounded multiple times in the field, Stewart succeeded Lieutenant Colonel Agar Adamson in command of the P.P.C.L.I in March 1918. During the summer, he led the battalion through the heavy fighting at Amiens and the Scarpe, where he lost nearly half of his men. For “his extreme energy and resourcefulness, his sound tactical knowledge and ability,” Stewart received a Bar to his D.S.O. The citation noted, “His consistent cheerfulness, his complete disregard of danger, and his personal example were undoubtedly instrumental in the successes of his battalion.”

Stewart was killed by an exploding shell on 27 September 1918 at the battle of Cambrai. Adamson reflected “…poor Stewart has been killed. I am very sorry. I have always felt he would pull through.”