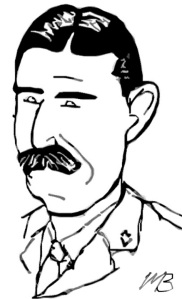 …he followed the immediate centre of his Battalion, and seeing his men held up by most destructive fire of all kinds, he pushed forward to personally lead them and was killed while so doing. On the way, prior to his death, he showed an extreme coolness and an almost superhuman courage.

Archibald Ernest Graham McKenzie was a New Brunswick lawyer, Liberal Party campaigner and militia officer. He was born 21 January 1878 in Campbellton, McKenzie served as second-in-command with the 26th Battalion when it arrived in France in September 1915. By May 1916, he had replaced an ill Lieutenant Colonel James L. McAvity as commander of the battalion.

END_OF_DOCUMENT_TOKEN_TO_BE_REPLACED

I see in my mind many bright, cheery figures, some of the best of our county’s stock, soldiers every inch of them—how sorry I am they are not returning with us today, and how I feel for their people. But though they are sleeping in some military graveyard in France or Belgium, I know they are not forgotten…

A member of the 62nd Fusiliers and Boer War veteran, Walter Richard Brown enlisted with the 26th Battalion in February 1915. He was born on 3 June 1872 in London, England. After the removal of Lieutenant Colonel James L. McAvity in May 1916 and the departure of Lieutenant Colonel A. E. G. McKenzie to an officer’s course in summer 1917, Brown assumed command of the battalion.