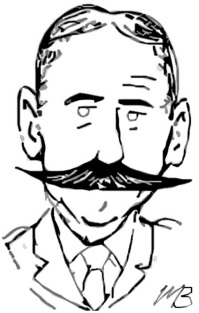 Col. Bruce’s wife was not able to give definite particulars about her husband’s death, on account of suffering from the sudden shock.

George William Bruce was a barrister, militia officer and former commander of the 35th Simcoe Rifles. He was born in Simcoe County, Canada West on 26 January 1862. He graduated from Victoria College in 1885 and joined the militia in 1890. He moved west to join a law practice in Manitoba after retiring to the reserve officers’ list in 1912. In January 1916, Bruce was appointed to raise the 181st Battalion from Brandon, Manitoba.

In his personal life, Bruce was, an Orangeman, Conservative Party activist and member of the Military Institute of Toronto. A lover of history, he was also a prominent figure in the Ontario Historical Society.

Due to the strain of organizing the battalion, the fifty-four year old suffered a nervous breakdown. He was permitted rest leave to recuperate in the east and “regain his accustomed vigour.” He died on a train while traveling with his wife, Margret Eleanor McClelland through Chapleau, Ontario. He took a misstep in the aisle, struck his head and died on 22 April 1916. He was buried in Toronto’s Mount Pleasant Cemetery.

Command of the 181st passed to Captain David Wilson Beaubier.