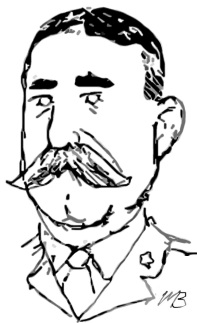 Col. Parsons, who was appointed to be second in command of the 185th Battalion, is a very strong Liberal.

It is a fact as reported to me that great credit is taken by the Liberal party in Nova Scotia for the organization of the Highland Brigade. Yet my hon. friend stands on the floor of this Parliament and says that the whole thing is honeycombed with politics.

A senior officer with the 85th, 185th and 219th Battalions, Norval Henry Parsons was promoted to command the 246th in August 1916. The latest Nova Scotia battalion was designated as a reserve unit for the expected formation of a Highlander Brigade. Parson was born in Kingston, Nova Scotia on 25 March 1868. He was a lifelong militiaman and former commanding officer of the 68th Regiment.

Despite accusations of partisanship in the CEF, Prime Minister Borden emphasized, “Colonel N. H. Parsons, one of the strongest and most active Liberal workers in the county of Kings.” Criticizing the recruitment system and the Government’s broken promise to the volunteers, Lawrence Geoffrey Power, Liberal Senator for Halifax lamented:

These men were recruited in Nova Scotia by officers who were supposed to be speaking with authority, and who went amongst our people and said: “This is to be a Nova Scotian Highland brigade; they are to go into action together; they are to fight together and live together.” These men went over to the old country, and they had hardly go there when they were broken up; the 85th, the backbone of the brigade, was sent on ahead, and the other have gone no one knows where.

With the Highlander brigade concept discontinued and the voluntary system coming to an end, the 246th was disbanded for overseas drafts. Parsons led the second draft to England in June 1917 which was absorbed into the 17th Reserve Battalion. Parsons remained in England for a time before returning home in October.

Both of his sons fought in the Great war and survived. His daughter, Mona Louise Parsons, was an actress and nurse who aided the Dutch resistance during the Second World War. She was arrested by the Gestapo and sentenced to death, which was later commuted to life at hard labour. She escaped the German prison camp during an Allied bombing raid in March 1945. Learn more about her fascinating life here.