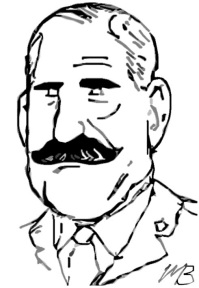 Charles Hugh LePailleur Jones was a well-known figure in the paper and pulp industry. He was born in Montreal on 1 May 1876 and graduated with a degree in engineering from McGill University. He had belonged to the 3rd Victoria Rifles before moving to Sault Ste. Marie where he became commanding officer of the 51st Soo Rifles. In August 1916, Jones was appointed to raise the 227th Battalion from Sudbury-Manitoulin-Algoma.

Nicknamed the Men o’ the North, the 227th was recruited in northern Ontario, “where there are more stumps than men.” Jones explained, “Every Commanding Officer, if he is any good at all, thinks his battalion is the best there is, and would not be any good if he did not.”

Addressing the Canadian Pulp and Paper Association shortly before leaving for England in February 1917, Jones warned of the disastrous consequences of defeat:

In April 1917, the 227th was absorbed into the 8th Reserve Battalion. Prior to the battalion’s leaving Canada, the president of the Canadian Pulp and Paper Association observed, “Colonel Jones says he is not a real soldier. Well, we all know he will be a real soldier when he gets there, if, as he says, it requires getting there to make one.” While serving with the Forestry Corps in France, Jones was decorated, twice mentioned in the dispatches and promoted to full colonel. After demobilization, he became honorary colonel of the Sault Ste. Marie and Sunbury Regiment.

In addition to his business interests, Jones was a fisherman, sportsman, golfer and amateur historian. He died in Quebec on 22 May 1949.