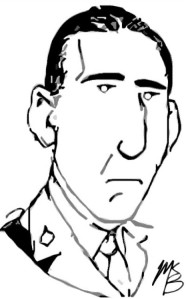 It makes me mad to see hundreds of fit men, a great many of whom can undoubtedly be spared, walking about and going to picture shows, without any thought of enlisting, when ten thousand of their fellow Canadians are either giving up their lives or being wounded every month.

Born in Toronto on 17 November 1881, Hugh Farquharson Osler was the son of Edmund Boyd Osler (1845—1924), prominent financier, banker and Tory politician. The elder Osler was Conservative MP for Toronto West between 1896 and 1917. After graduating from the Royal Military College, Hugh moved to Winnipeg where he worked for a corporate investment firm.

Second-in-command of the 79th Cameron Highlanders Regiment, Osler went overseas as a major with the 43rd Battalion under the command of Robert McDonnell Thomson. He served on the front from February until July 1916, when he returned to Winnipeg to take command of the 174th Battalion from James Alexander Cantlie.

Recognizing the difficult recruiting environment, Osler wrote to his father to express frustrations with lack of government support: “Both parties seem frightened of losing votes, and if that is the case, they are the real shirkers.” After the 174th was absorbed into the reserves, Osler assumed command of the 1st Depot Manitoba Regiment in September 1917.

After the war, he remained a prominent figure in Winnipeg society and became president of the Manitoba Rifle Association. He died on 8 December 1943.