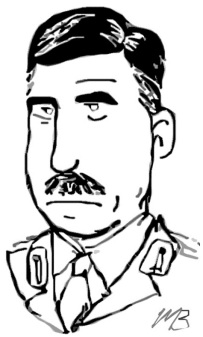 Words can but inadequately express our feelings. Your personality at work or at play was an inspiration to all ranks, your personal disregard of danger, your sympathy with the wounded, and your human understating of our frailties will always dwell in our memories.

John Fletcher Leopold Embury was a Regina lawyer and commanding officer of the 95th Saskatchewan Rifles. Born on 10 November 1875 in Hastings County, Ontario, he was a graduate of the University of Toronto and Osgoode Hall. In late 1914, Embury was authorized to form the 28th Battalion from the Northwest. The battalion’s official history declared, “No better choice could have been made. The colonel was a man’s man and won the confidence of all ranks…”

The 28th arrived in England in June 1915 and deployed to France as part of the 6th Infantry Brigade in the 2nd Division in September. Embury commanded the Northwesters for one year until he was wounded and shell shocked at the battle of the Somme on 14 September 1916.

After only three days of fighting, less than three hundred men remained in the 28th Battalion. One of his soldiers recalled: “Tears rolled down our old Colonel’s face as he looked at us. ‘My boys! my boys!’ was all he could say.” Embury was replaced by Alexander Ross on 17 September 1916.

Once Embury recovered, he received a promotion to brigadier general in command of the 13th Brigade in November 1916. He later commanded the 2nd Brigade in the field between January and March 1918. He was put out of action from acute appendicitis.

During the 1917 Saskatchewan election, the Conservative Party nominated Embury to challenge Premier William Melville Martin in the riding of Regina City. Embury, who had been an unsuccessful candidate in the 1912 contest, ran in absentia on a conscription platform. In the election result on 26 June, Martin prevailed with an increased Liberal majority.

At the end of the war, Embury was elevated to the Saskatchewan Supreme Court. One biography praised him as “exceptionally free from all judicial bias.” During the Second World War, he served as chairman of the Regina Mobilization Board. Contemptuous of pacifists, conscientious objectors and students seeking deferrals, Embury lamented, “The way we are going we’d never manage our share for ourselves. Speaking as a resident of my own province, I am ashamed.”