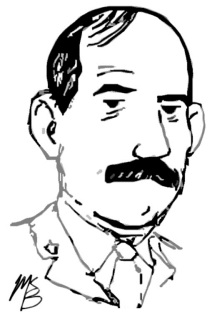 But it is awful to contemplate the misery and suffering in this old world & were I to allow myself to ponder over what I have seen & what I have suffered thro the loss of the bravest & best in the world, I would soon become absolutely incapable of “Carrying on.”

Samuel Simpson Sharpe was a militia major and Conservative Member of Parliament for Ontario North (1908—1918). Born on 13 March 1873 in Zephyr, Scott Township, Ontario, he was a graduate from the University of Toronto and Osgoode Hall. During his university days, he was a champion tennis player and became a prominent solicitor in Uxbridge.

Guided by his strong Methodist faith, Sharpe viewed the Great War as a battle of Christian civilization against barbarism. An intra-party rival of Militia Minister Sam Hughes, Sharpe was overlooked when the First Division assembled at Valcartier in August 1914. Thomas Gowans, editor of the Uxbridge Journal, defamed Sharpe, writing, “There was only one officer who flunked out and ran home.” Sharpe later roughed up Gowans and successfully sued him for libel. 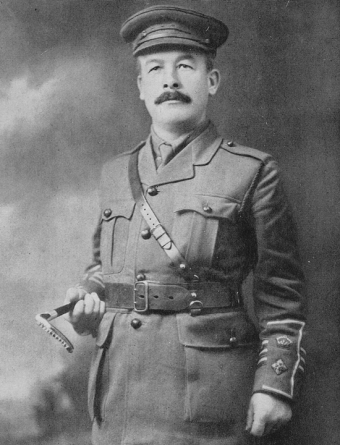 Despite his prior differences with Hughes, both agreed to “bury the hatchet.” In November 1915, Sharpe organized the 116th Battalion and began recruiting men throughout Ontario County. After departing Canada on 23 July 1916, the 116th arrived for training in England. Sharpe managed to ensure that much of battalion remained together when deployed to the frontlines of France in February 1917.

Attached to 9th Infantry Brigade of the 3rd Division, the battalion first saw action during the assault on Vimy Ridge in early April 1917. In July, the 116th was tasked with organizing a raid on an important German trench near Avion, France. Sharpe personally carried out a dangerous reconnaissance mission of the enemy position. Private Everist praised his commander, “He didn’t have to be there; he could have been away back of the lines had he wished.”

Sharpe led his battalion through Hill 70, Lens and Passchendaele, where he witnessed hundreds of his men killed and wounded. He was re-elected in December 1917 and received the Distinguished Service Order for gallantry under fire. In his last message to the people of Ontario County, Sharpe explained, “Whether at Ottawa or whether in France, I have given my best, such as it is, to the service of my country. In every way possible, I have striven to maintain the honor of my country.”

Overcome by the mental strain and the misery of war, Sharpe suffered a nervous breakdown and was hospitalized in England. He was released to Canada in mid-May 1918. Just days after arriving in Montreal, on 25 May, he jumped to his death from a window in the Royal Victoria Hospital. As Stewart Lyon, editor of the Toronto Globe, eulogized, “He gave up his life as truly ‘on the field of honor’ as if he had fallen in action”

One thought on “The Methodist”