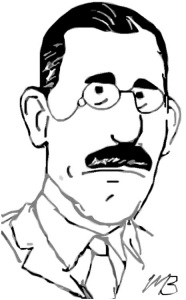 This country has a great future before it most certainly, but only those who are healthy and strong, both mentally and physically, ought to be allowed to come out and help people it.

The wild free life of the North-West, untrammeled by social fads, has its attractions, but to be able to really enjoy it, or I should be better within the truth if I write, to endure it, one must have plenty of grit, and some education leading up to it, otherwise dire discouragement and failure, may be the result.

(Homesteader, Canadian Life As I Found It, 1908, preface)

Edward Constant Joseph Lelievre Henniker was born on 28 March 1875 in Dinan, France. Henniker immigrated from England to Canada with his wife and six-month old son in 1904. The twenty-nine year old immigrant settled in Saskatchewan to build a homestead on a ranch outside of Tessier. His wife Mabel later collected letters she had written home in a book about the young family’s experiences on the prairies, Canadian Life As I Found It: Four Years’ Homesteading in the North-West Territories.

Henniker served in the 22nd Saskatchewan Light Horse and later the British Columbia Dragoons when the family moved to Enderby, British Columbia. In March 1915, the he first enlisted with the 2nd Canadian Mounted Rifles before receiving authorization to raise the 103rd Battalion from Victoria. 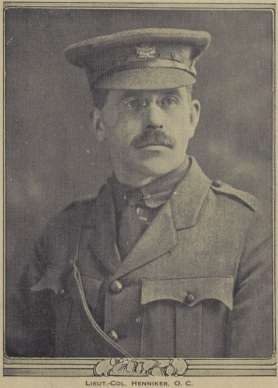 Nicknamed the Timber Wolves , the battalion journal called on all recruits to work up their enthusiasm:

Well why not live up to our name and get a good howl going? Our cry ought to be steadily practiced until we can put it out in a proper wolf-like way.

When we arrive at our berth at Plymouth or Bristol what better greeting to the folks at the wharf than a good long inspiring “Howl!”

After arriving in England in July 1916, the 103rd Timber Wolves provided reinforcement drafts and was absorbed into the 16th Reserve Battalion under Henniker’s command. He was seconded to the Imperial Forces in July 1917. Following a gas attack in March 1918, his health broke down and was diagnosed with exhaustion and general debility.