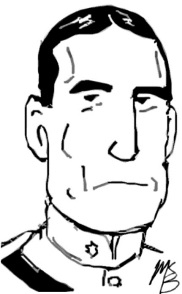 The local soldier hockeyists completely outclassed the Saskatchewan champions in the two-game series and proved themselves worthy holders of the coveted mug.

This performance of Colonel Murray’s men is certainly remarkable, as the cup-seekers are a redoubtable squad of players but they were unable to cope with the sensational close checking and speed of the Winnipeggers. Only in the first fifteen minutes of the first game were the Westerners really in the running, as after that they were outplayed and seldom looked dangerous.

Born on 23 June 1876 in Portsmouth, England, Francis John Murray was a professional soldier and twenty-two year veteran of the Imperial Army. Having fought in the Boer War, Murray was appointed to raise the 61st Battalion from Winnipeg in spring 1915.

While awaiting deployment overseas, the 61st hockey team entered the 1915-1916 season of the Winnipeg Patriotic League. A prominent figure in sporting circles, Murray served as the team president. Under Murray’s leadership, the team was regarded as a strong contender against the other amateur squads. After winning the Manitoba Senior League Championship, the battalion sought the Allan Cup in March 1916. In a close two game series, the 61st Battalion defeated the defending champions, the Winnipeg Monarchs by a combined score of 11 to 10.

The 61st next defended the Allan Cup against the Winnipeg Victorias and the Fort William club. In the final challenge series, the 61st trounced the western champion Regina Victorias by a combined score of 13 to 3. The Winnipeg Tribune declared, “When a team makes a bunch like Regina Vics look like novices they sure are playing hockey.”

Less than two weeks after their team secured the Allan Cup, the 61st Battalion departed for England. Shortly after disembarking in April 1916, the battalion was disbanded. Due to a lingering wound suffered during the South Africa campaign, Murray had trouble getting to the front. He was eventually attached to the 78th Battalion in April 1917 and later joined 75th Battalion from August 1917 to May 1918. Murray returned to Winnipeg in August 1918 to take a position with the Invalid Soldiers Commission.