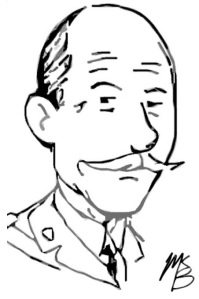 The Canadian parks, I believe, possess vast potentialities for the betterment of the Canadian people in body, mind, and resultant energy and activity, and each year, as their attractions become better known, they will undoubtedly draw increasingly larger numbers to share in the benefits of the out-of-door life.

Samuel Maynard Rogers was a military man, outdoorsman and sportsman. Born on 14 April 1862 in Plymouth, England, Rogers had volunteered to fight in the 1885 Rebellion and the Boer War. In 1913, Rogers was appointed first superintendent of Jasper Forest Park. As the administrator of Jasper, he promoted efficiency, wildlife protection and tourism.

An early visitor to the park, famous author Arthur Conan Doyle noted, “But this new Jasper Park is the latest and the wildest of all these reserves. Some years ago it was absolute wilderness, and much of it impenetrable. Now, through the energy of Colonel Rogers, trails have been cut through it in various directions, and a great number of adventurous trips into country which is practically unknown can be carried out with ease and comfort.” (Doyle, Memories and Adventures, 1924)

In September 1914, Rogers was appointed commander of the 9th Battalion when the First Contingent organized at Valcartier, where he was also camp commandant. After arriving in England Rogers became commanding officer of a training brigade at Tedworth. He returned to Canada in May 1916 to take an administrative position at Valcartier on General Lessard’s staff.

According to Liberal MP Frank Oliver, the experience of the 9th Battalion was emblematic of military mismanagement and Conservative Party favoritism:

My information is that it was found that Colonel Rogers was not competent for the position of colonel in the field… so far as I am aware, he did no military service, and my opinion is that not only did he do no military service but, by reason of his lack of military ability, he did a serious dis-service in having been the cause of breaking up the 9th Battalion.

I do not know how many other cases there may be like that, but it appears to me that when there is such a startling case it should be made public.

Sir Sam Hughes and Rogers strongly objected to Oliver’s comments and demanded a retraction. In the Edmonton MP’s irreverent style, Oliver instead reiterated that Rogers was incompetent and invited the Militia Minister to share the blame for breaking up the 9th Battalion:

Colonel Rogers in his letter also seems to suggest that I am attacking him. I repeat that I have no desire to attack Colonel Rogers. But I do desire to place before the House the fact that every man in the 9th Battalion, and his right to take his part in the cause for which he volunteered, is just as important to me as Colonel Rogers and General Hughes.

After the war, Rogers resumed his responsibilities at Jasper as park superintendent until retirement in 1936. He died in Ottawa on 30 July 1940.