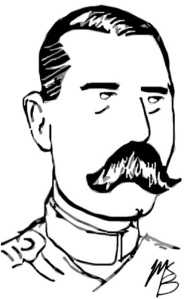 I used to be up at cockcrow when a small child on Christmas Day, to see what Santa Claus had brought me, and I shall be up early enough to-morrow in all conscience too, but for a different reason—standing to arms—so that I shall not get my throat cut.

Best of love to you for Christmas. Whilst you are in church I shall be in the trenches, but both doing our rightful duty, I trust.

On 25 December 1914, George Brenton Laurie described the Christmas truce in No Man’s Land as “English and German, begin to swarm out to meet each other.” Suspicious, Laurie initially held his men back before going to investigate himself. The Germans complimented the colonel on his battalion’s marksmanship and were eager to learn if the Canadian Division had arrived yet. The armistice held for two days until both sides resumed the fighting.