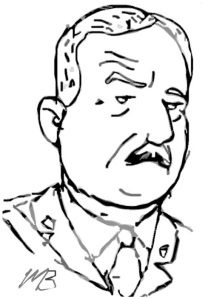 Colonel Meighen was a very thorough and painstaking officer, very much loved by his men. Several companies of his battalion were French Canadians and they fairly worshipped him. He was a model trench commandant, never tired of strengthening the works, and always ready himself to do anything that he asked of his officers or men. He had made an excellent battalion out of his corps, and as we had alternated with them in the trenches until this turn, we knew their worth.

Frank Stephen Meighen was a Montreal businessman, mining director and patron of the arts. He was born on 26 December 1870 in Perth, Ontario. After inheriting the family fortune after the death of his father, Meighen pursued various business interests in Montreal. As a trained pianist, he held a particular interest for arts and culture. He founded the Montreal Opera Company, but it only ran for three seasons between 1910 and 1913.