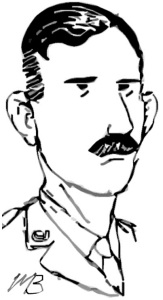 Colonel Carpenter, who had resided in Bermuda since the early days of the war, was deservedly popular in the community. He had a great charm of manner and his splendid courtesy and generous disposition won for him a great circle of friends. Until quite recently he was in the best of health and could daily be seen taking his vigorous early morning walk to the South Shore where he loved to bathe.

Albert Edward Carpenter was born on 2 September 1866 in Hamilton, Canada West. He joined the Royal Canadian Regiment in 1889 and served in the Boer War. He commanded the regiment from January until August 1915 while on garrison duty in Bermuda. When the R.C.R. departed for Halifax to sail on to England, Carpenter was unable to join his men in the field due to ill health and overage.