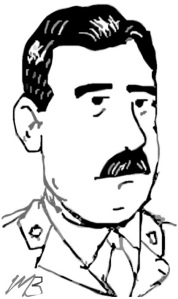 The student, then, is working at high pressure and has no time for consideration of the subjects he is taught in the day. As a matter of fact he has no time to think for himself, and the consequence is that he must come out of the university more or less as a sort of stuffed fowl rather than a human being who can tackle a question and analyse it. We have found this not only with our own students but with students from elsewhere.

Daniel Sayre MacKay was a Manitoba physician, graduate of McGill University, officer in the Cameron Highlanders and second-in-command of Lieutenant Colonel Snider’s 27th Battalion. The son of Conservative Senator William MacKay (1847—1915), Major MacKay was born in Reserve Mines, Nova Scotia on 20 January 1878. While serving overseas with the 6th Brigade headquarters, MacKay was selected to command the 196th raised from university students in western Canada.