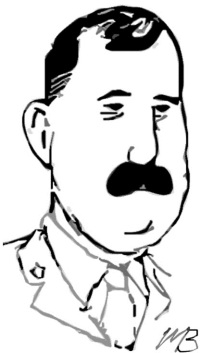 He proved himself an excellent Group Commander, energetic and capable, and concerned for the comfort of the men under his command.

John Young Reid Jr. was a department store manager and merchant in Winnipeg. Born in Toronto on 30 June 1871, he was the son of John Reid Sr., publisher of the Toronto Globe. After working as a clerk in Toronto, the younger Reid moved to Manitoba in 1907. He was one of the first officers in the 79th Cameron Highlanders and became senior major of the 179th Battalion in January 1916.

On 30 May 1916, Reid succeeded James Alexander Cantlie in command of the 179th. The battalion sailed for England in October. By January 1917, it was re-designated the 14th Reserve Battalion under Reid’s command. He proceeded to France attached to the British Army as head of the 66th Labour Brigade. He served in France until summer 1918 when business matters necessitated leave to return to Canada.

After the war, Reid became honorary colonel of the 1st Battalion, Queen’s Own Cameron Highlanders. He died in Winnipeg on 1 August 1945.