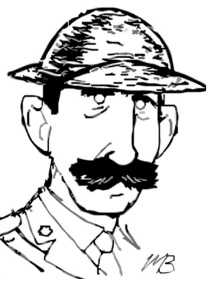 Referring to the untrained men who won so brave a reputation, Col. Gilson said in talking with a German clergyman he used the word but could not induce him to alter his opinion: “How can you state Canada had no professional soldiers? These men are fully trained and regulars of the finest class.”

Born in India on 1 May 1877, William Forbes Gilson was a veteran of the West African Frontier Field Force. Enlisting in the CEF as a sergeant, within two years Gilson rose to command the 7th Battalion. He was awarded the Distinguished Service Order on 18 October 1917, a D.S.O. Bar for actions of 8 August 1918 and a second D.S.O. Bar for gallantry on 2 September 1918.

Gilson became the 7th Battalion adjutant in May 1915 and succeeded Lt. Col. Stanley Gardner in command of the unit on 9 October 1916. Gilson led the 7th Battalion for the next twenty-five months until the end of the war. During the final Hundred Day’s Offensive, he distinguished himself on multiple occasions, winning two Bars to his D.S.O.

The citation for the second Bar read:

For conspicuous gallantry and ability to command. He captured with his battalion, on 2nd September 1918, the Drocourt-Queant line, together with 600 prisoners, his bold and able leadership in face of heavy machine-gun fire overcoming all opposition with minimum losses. Later in the day, under heavy artillery and machine fire, he went forward and personally established his new line.