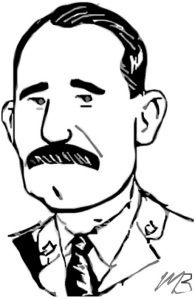 “My Brigadier, the son of a bitch, is still alive— I’ll kill him if I see him.”

Born in West Flamborough, Ontario on 8 June 1886, John Arthur Clark was a Vancouver barrister and militiaman. A major in the 72nd (Seaforth Highlanders of Canada) Regiment, Clark was appointed to command the 72nd Battalion, one of the few CEF units to perpetuate its militia designation. Commenting on the tremendous responsibility of a commanding officer one of his men observed that the twenty-nine year old colonel “looked forty.”

Determined to raise the best possible unit, Clark was according one of his soldiers, “very ambitious and a man with high ideals, never being satisfied with anything that is not the very best in his officers and men and he rooted out incompetence wherever found.” After inspecting the unit, British Field Marshal John French congratulated Clark on recruiting, “A magnificent lot of men. What strikes one about this battalion is that they LOOK like soldiers.” The 72nd joined the 12th Infantry Brigade of the 4th Division on the front lines of France in August 1916.

After leading the battalion through the battle of the Somme, Vimy Ridge and Passchendaele, Clarke was rewarded with a Distinguished Service Order and a promotion to brigadier general in charge of the 7th Infantry Brigade. Major G. H. Kirkpatrick assumed command of the 72nd on 12 September 1918.

The official Seaforth Highlanders history described the reaction of the men to Clark’s farewell address: “They had come to regard him as almost indispensable to the welfare of the Battalion, and the hearty cheers accorded to the general at the conclusion of his speech only masked the deeper feelings that pervaded all ranks.”

Not all of Clark’s subordinates would think so highly of the new general. Captain G. W. Little of the P.P.C.L.I. argued that during the battle of Cambrai the inexperienced Clark had butchered his men in poorly planned attacks. When interviewed by the CBC in the 1964, Little remained angry and bitter in his feelings towards his former general.

After the war, Clark was elected to the House of Commons as the Conservative member for Burrard (1921—1925) and Vancouver-Burrard (1925—1930). In Parliament, he advocated on behalf of veterans and supported liberal pension legislation. In particular, he championed the case of 72nd Battalion Private Stanley Aylett, who had been killed in action on 4 September 1916. During the 1920s, a pension board had denied the separation allowance to Aylett’s widow suggesting that the dead soldier possessed a “weak character.” Clark objected that these insinuations were “entirely uncalled for,” and emphasized, “He paid the supreme sacrifice… while serving his country.”

Clark did not seek re-nomination in the 1930 federal election and resumed his law practice. He died at the age of eighty-nine on 18 January 1976.

One thought on “The Son of a Bitch”