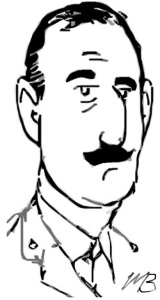 Harvey was born in London, England on 18 August 1888. A member of an old Scottish military family, he had been a soldier with the Black Watch in India. While living in eastern Ontario in 1914, he joined the 109th Regiment and then volunteered with the 84th Battalion, stationed in Oshawa. In July 1916, he transferred to the 54th Battalion at the request of fellow Indian Army veteran Lieutenant Colonel A. H. G. Kemball. Harvey proceeded to France with the 54th in August and received the Distinguished Service Order in November.

Major R. D. Davies, who Harvey had succeeded as second-in-command, noticed much resistance to the appointment among the other 54th officers, who recognized that the newcomer would delay their own promotions. Lieutenant Green agreed, “When Col. Harvey joined the Battalion originally, there appeared to be a little feeling against him, but when we came to France, as far as I could tell, there was none at all. We all liked Col. Harvey in the trenches, and he treated everybody well.” After the death of Kemball in a trench raid on 1 March 1917, command passed to Harvey.

According to Jesse Wright, formerly of the 169th Battalion, the 54th was in chaos after Kemball’s death. Harvey therefore had to contend with a group of hostile officers and demoralized men in reorganizing the unit. Davies, who was called as a defence witness, stated “I can say that his ability as a disciplinarian was of great value in the 54th Battalion, and was recognized as such by everybody.”

At his court martial, Harvey defended his conduct from the 21 May incident, stating that he had received authorization to leave the camp and made arrangements for his absence. The embattled colonel argued that he was following the model of his predecessor Kemball in developing the responsibility of junior officers, explaining, “prior to and after getting command of the 54th Battalion I was in the habit of taking one afternoon off when the Battalion came into rest.”

This decision on my part may have been an error of judgement, but certainly not an offence, with the clear record that has been given me, and certainly not a case for Court Martial.” Harvey ended his statement to the court, declaring, “I did not join the Expeditionary Force to serve in England, and I have been led to believe that my services can still be used to good advantage in France.

Despite a vigorous defence, the court reprimanded Harvey, who was found guilty of conduct to the prejudice of good order and military discipline.