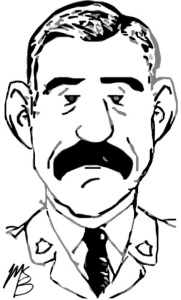 Colonel Pritchard was one of Canada’s unwanted senior officers. He had given up his business, left his home in Ontario, raised a battalion of friends and neighbours, trained them to the best of his ability and knowledge, and taken them to where they could smell gunpowder. Then he was told he could go home, he was no longer wanted. What would they call him at home?

Born on 9 February 1868 in Nichol Township, Ontario, Robert Thomas Pritchard was a farmer in Wellington County and member of the 30th Regiment since 1893. In March 1916, he transferred from the 111th Battalion to take command of the newly authorized 153rd. After arriving in England in May 1917, the battalion was broken up and Pritchard was deemed surplus to requirements.

According to Major John McKendrick Hughes of the 151st Battalion, Pritchard “grasped at the first opportunity to go where his boys had gone, humble though the position might be.” The former 153rd commander joined the British 10th Corps as an agriculture officer. As part of his duties, Pritchard cultivated a garden near the battle site of St. Julien. Hughes observed:

You men of Ontario are famous for your gardens. If, when you dig, you turn up an arm, a leg, or part of a thigh bone, would you use it for the marker at the end of a row of carrots? I think you would. You are of the same breed as that man Pritchard.

After the war, Pritchard unsuccessfully contested the October 1919 Ontario election for the Conservatives. He later challenged United Farmer Party Attorney General William Edgar Raney in a February 1920 by-election as an independent candidate. Pritchard opposed Raney as an aloof lawyer who would be unable to represent farmer interests. However, frustrated by the inability of Liberals and Conservatives to unite behind his candidacy, Pritchard dropped out at the last minute, allowing Raney to win by acclamation.

For his part, Raney regretted the withdrawal of the independent soldier-candidate. After his victory, the Attorney General explained, “With him against me it was quite certain that the contest would be decently and respectably conducted.”

Pritchard returned to farming. He died in Fergus, Wellington County on 17 July 1955.