Colonel Hilliam who was now our commanding officer, says that the 25th battalion made his name; but the 25th boys are equally positive that he made the battalion. It was truly wonderful the confidence we placed in him and he never disappointed us. He was very strong on discipline, and when all is said and done that is most essential in the army.

Born in December 1862 in Spalding, England, Edward Hilliam was a soldier, policeman, boxer and swordsman. He had belonged to the 17th Lancers in the British Army before immigrating to Canada to join the North West Mounted Police in 1893. In 1899, he volunteered to serve in the Boer War and during the campaign, earned a reputation as an excellent scout and was praised as “a bold and resolute leader.” 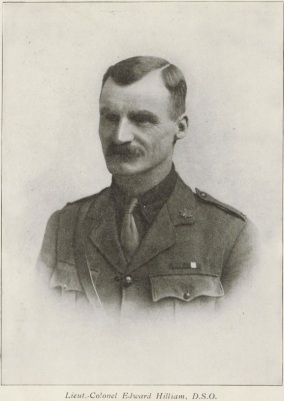 On the outbreak of the Great War, the fifty-two year old enlisted as a captain with the 5th Battalion and became adjutant to Lieutenant Colonel G. S. Tuxford. Seriously wounded during Second Ypres, he was invalided to England before transferring to the 25th Battalion. He quickly assumed command from George Augustus LeCain on 26 October 1915. Lieutenant R. Lewis recalled, “Our colonel was a regular fire eater, and wanted to be at it all the time.” He added, “But thanks to our Commanding Officer we never took second place to any battalion in France.”

In January 1917, Hilliam was promoted to take command of the 10th Infantry Battalion. Majors J. A. De Lancy and D. S. Bauld took over the 25th Rifles. After the battle of Passchendaele in November, the fifty-five year old veteran transferred to the British Army. By the end of the war, his men regarded Hilliam as invincible fighter and a beloved commander. Wounded multiple times in action, he received the Distinguished Service and Bar, the Legion d’Honneur, Croix de Guerre, and was six times mentioned in the dispatches.

One thought on “The Bulldog”