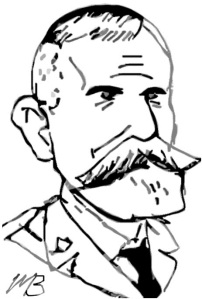 In the December 1917 federal election, Andrews won the riding of Winnipeg Centre with a unprecedented majority of 20,000 votes. He received 7,941 soldier votes compared to 330 for his opponent. Sitting as a Unionist, the former Liberal Andrews shunned partisan affiliation in favour of advocating on behalf of returned soldiers. 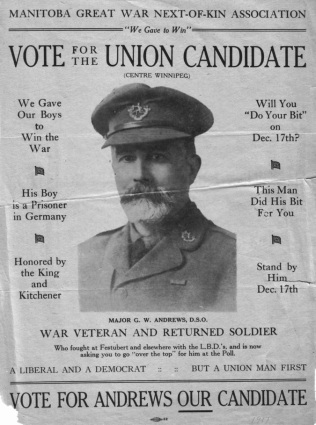 He sympathized with strikers in Winnipeg during the General Strike and defended protesting soldiers against the label of Bolshevism . Andrews hoped veterans’ shared experience of the war would remove class distinctions and create a better society:

I remember that once it was my duty to help bury in one orchard all classes and all ranks of the sons of Canada and there lie, if my memory serves, the son of a senator, the son of a millionaire and the son of a labour union leader in one shell hole.

Increasingly disillusioned with the Union Government after the war, he moved to the cross benches in March 1920. He felt political leaders where abandoning the veterans in an attempt to restore Canada to its prewar position rather than build a new, fairer nation. Predicting the collapse of the Conservative Party, he ran for re-election as an independent in December 1921 but came in as distant fifth to Labour candidate J. S. Woodsworth.

Andrews died of a heart attack in Winnipeg on 5 November 1943.