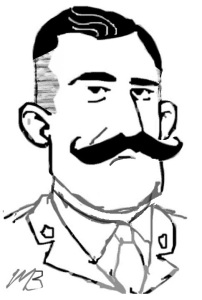 I was going to suggest that there be a public holiday for voting. We should leave the holy day alone. I imagine that if we went from one end of Canada to the other we should find that the bulk of the people are opposed to the idea of Sunday voting. In Germany they vote on Sunday, but we are not bound to follow Germany in this or any other respect.

Born on 28 January 1864 in Whycocomagh, Nova Scotia, Archibald Beaton Gillis was an early settler, farmer and merchant in the Northwest Territories during the 1880s. In 1894, he was elected Conservative representative in the Northwest Territories legislature. He was speaker of the assembly from 1902 until the creation of the province of Saskatchewan in 1905. He remained a member of the Saskatchewan legislature as a Provincial Rights Party member for Whitewood until his defeat in the 1912 election.

In early 1916, Gillis was authorized to raise the 217th Battalion from Qu’Appelle and Assiniboia. During the 1916/1917 season of the Saskatchewan senior hockey league, the 217th team competed with the 210th (Moose Jaw), 214th (Saskatoon), the 229th (Moose Jaw), the Saskatoon Pilgrims and the Regina Victorias. The 217th finished in fourth place with a record of 4-6-0. The team had 16 goals for and 55 against.

As soon as the battalion arrived in England in June 1917, it was absorbed into the 19th Reserve Battalion. Liberal MP for Qu’Appelle, Levi Thomson, ridiculed surplus senior officers like Colonel Gillis:

I would not like to charge any man with disloyalty, not even those political colonels who strut around our country in the King’s uniform, drawing big pay, and who have been on a free trip across the Atlantic to England or France, but who, the moment they smelt gunpowder, turned tail and skipped back home, leaving their men to go to the front without them.

Lieutenant Colonel James Davis Taylor, former commander of the 131st rebuked Thomson’s remarks as “very mischievous and insulting to the commanding officers in His Majesty’s army, of whom I have the honour to be one.”

Prime Minister Arthur Meighen appointed Gillis to the Senate on 17 November 1921. He remained in the upper chamber until his death on 18 January 1940. Meighen eulogized the “rugged Westerner”: “His personality and his whole outlook reflected that sturdy physique which he possessed through nearly all his life.”