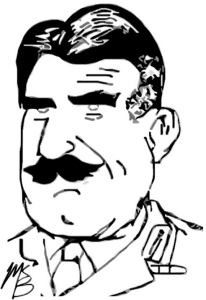 There was a bunk in there, and the brigadier was lying there and he was dead drunk. He looked up and mumbled something at me.

It was a pretty disgusting business.

Born on 28 July 1866, Frederick William Hill was a lawyer, former mayor of Niagara Falls (1898) and thirty-year member of the 44th Lincoln and Welland Regiment. When the First Contingent assembled at Valcartier in August 1914, Hill was appointed to command the 1st Battalion from Western Ontario.

Hill led the 1st through the heavy fighting on the Ypres Salient in spring 1915. In January 1916, he was promoted to brigadier general in charge of the 9th Infantry Brigade until July 1918. Major F. A. Creighton assumed command of the 1st Battalion.

During the battle of Passchendaele in October 1917, one lieutenant in his brigade thought Hill “a damned drunkard.” He had claimed that Lieutenant Colonel W. W. Foster of the 52nd Battalion and other unit commanders had to take charge while Hill lay drunk and semiconscious in his dugout. Likely suffering from the mental strain of three years in the field, Hill was relieved of duty by Corps Commander General Arthur Currie in summer 1918.

Hill joined the Permanent Force after the war and headed No. 7 Military District until retirement from the army in 1930. He was appointed commissioner New Brunswick provincial police and later resumed his law career in Fredericton until his death on 29 July 1947.