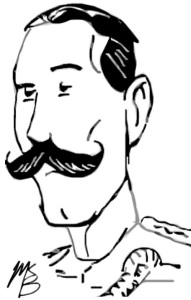 All day long I had witnessed the tragedy of men “made in the image of God” bringing their utmost skill and science to the hateful task of mutual murder.

As an exhibition of scientific slaughter the firing was lacking in nothing. The range of the guns was exact, the shooting perfect. The shrapnel burst over the heads of the retreating troops, as it were in large patterns. There was no cover, no escape for the unhappy Russians. Under this awful hail of bullets the men dropped like wheat beneath the sickle of the reaper. Death most truly was gathering a rich harvest.

Born on 10 September 1882, Leopold Guy Francis Maynard Greville was the son of British Conservative MP Francis Greville, 5th Earl of Warwick (styled Lord Brooke) and Daisy Greville, Lady Warwick, a socialist socialite who had been mistress to King Edward VII. While a student at Eton, Lord Brooke ran away to fight in the Boer War. He was a press correspondent during the Russo-Japanese War and recounted his experiences in An Eye-Witness in Manchuria (1905).

After the Russo-Japanese War, he was sent by his family to the United States in search of a millionaire American heiress to revive the fortunes of the financially desperate Warwick estate. Instead, he married Englishwoman Marjorie Eden, whose aristocratic family was in similar financial need. Lady Warwick attempted to raise money to pay off the family debts by blackmailing King George V over her affair with his father.

In 1913, Lord Brooke was posted to Canada, where he became an ally to Militia Minister Sam Hughes.By the outbreak of the First World War, he was aide-to-camp to General Sir John French, Chief of the Imperial General Staff. In June 1915, he was appointed by Hughes to command the 4th Infantry Brigade. Although Canadian Corps Commander General Alderson was unimpressed with Brooke’s abilities as a battlefield commander, Hughes supported his friend.

In May 1916, Brooke was placed in command of the 12th Brigade. In September, he was shot in the left hand and replaced by Brigadier General J. H. MacBrien. Once he recovered, Brooke became head of the Canadian Military Mission to France in Paris and reported on the treatment of Canadian prisoners interned in Switzerland. He later took on a secret mission to Moscow and was present during the October 1917 Revolution.

Troubled by psychological difficulties and shaken nerves after the war, Brooke descended into alcoholism. Suspected to be suffering from shell shock he was quietly institutionalized to recuperate from his illness. He succeeded his father as 6th Earl of Warwick in 1924 but the financial handicaps of a nobleman with a large and unprofitable estate forced him to move out of Warwick Castle.

His father had predicted the end of the traditional aristocratic ways in 1917: “I cannot see far ahead, but I can see a long way behind, and the conclusion forced upon me is that my sons and grandsons will have nothing like the good time I have enjoyed. The long-established order of things has been growing old with me, and the Great War has dug its grave.”