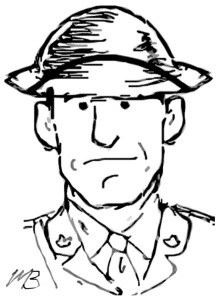 He wears two decorations on the breast for doing things to the Germans, which, according to King’s regulations and the best methods of procedure, should have been planned by him and executed by some mere sub. But he was one of those majors and colonels, rare in any army, who actually led his men—personally led, out in front. He has many raids to his credit. He showed up well in all battles.

Dougall Carmichael was a Grey County farmer with ten years’ experience with the 35th Simcoe Foresters. He was born on 8 November 1885 in Collingwood, Ontario. Standing five-foot-five, he joined Lieutenant Colonel H. A. Genet’s 58th Battalion and rose to second-in-command.

Twice wounded in the field and twice mentioned in dispatches, Carmichael received the Distinguished Service Order and Bar and the Military Cross and Bar. He succeeded Lieutenant Colonel George Randolph Pearkes in command of the 116th Battalion in September 1918. He solidified his reputation while leading the men through the battle of Cambrai until the armistice.

In September 1919, the United Farmers of Ontario Party nominated Carmichael to be their candidate for the riding of Grey Centre in the provincial election. He d

In the legislature, Carmichael promoted rural interests and denounced corruption and inefficiency. On 27 April 1923, he nearly came to blows with Colonel John Allister Currie, former commander of the 15th Battalion and Conservative MPP for Toronto. Notable for his bombastic personality and thin-skin, Currie provoked Carmichael into a fight.

“Don’t take that line with me,” warned Carmichael.

“Don’t you talk that way to me, your senior officer. You’ll get a court martial,” replied Currie.

As Carmichael rushed across the aisle, Currie taunted, “You can’t lick me! It won’t go with me!”

Speechless with anger, Carmichael shot back, “You dirty scoundrel.” Both were separated before the shouting match between the two war veterans turned violent.

The U.F.O. Party was defeated in 1923 and Carmichael lost his seat in 1925. He returned to farming and was appointed to the War Veterans Allowance Board in 1930. He commanded a training centre in Brockville during the Second World War.

2 thoughts on “The United Farmer”