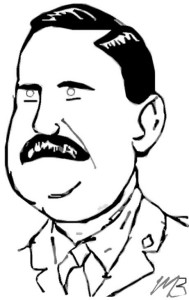 My position in this war has been very small, but I have had the privilege of serving some six months on the front… during the period I spent in France amid the horrors of war and human suffering and misery and the war’s leveling effects, I felt that if I survived and returned I could never again view affairs through the same coloured glasses as I did in 1914–before the war.

Harold Arthur Clement Machin was a veteran of the Boer War and Conservative MPP for Kenora in the Ontario legislature between 1908 and 1919. Born on 9 May 1875 in Rochester, New York, Machin grew up in Newfoundland and Port Arthur, Ontario. In December 1915, he was authorized to raise the 94th Battalion from the region around Port Arthur, Fort William, Kenora and Rainy River.

The battalion sailed for England in June 1916 and was broken up one month later. Machin organized the 1st Labour Battalion and deployed to France in January 1917. He served for several months on the front until he returned to Canada in September to oversee the enforcement of the Military Service Act.

In response to anti-conscription riots in Quebec, Machin was dispatched from Ottawa to investigate the situation. He reported to Prime Minister Borden that the rioting was “so bad… as to call for martial law and appointment of military governor immediately.” He made a personal appeal for Nationalist leader Armand Lavergne to calm the mob.

Machin retook his seat in the Ontario Legislature in March 1919. He was a vocal opponent of the Ontario Temperance Act of 1916 and joined the anti-prohibitionist Citizen’s Liberty League. Referring to Canada’s record at the front, Machine asked “…what use was the sacrifice there made if we are coming back to Ontario to find our freedom taken away from us here?”

He concluded this speech at Queen’s Park, reaffirming:

The aim of our government, the aim of every government, whether it be this or municipal government, must be to see that the people are made happy and contented, that there is ample time for work, play and rest, and that the German word Verboten (forbidden) does not enter into our national life and meet us at every turn.

Although Machin was defeated for re-election when he ran as an independent in October 1919, the Conservative Party later endorsed the repeal of the Temperance Act.