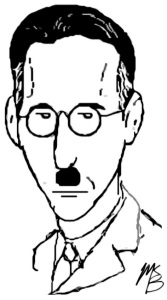 “I do not recommend a prison as a desirable place to gain experience. It is much better to profit from the experience of others.”—Col. Burritt

Royal Burritt was born on 1 April 1876 in Stratford, Ontario. He moved to Winnipeg in 1907, becoming a real estate agent and insurance broker. A militia officer in the 100th (Winnipeg Grenadiers) Regiment when the First Contingent of the Canadian Expeditionary Forces organized at Valcartier in August 1914, Burritt assumed command of the 11th Battalion.

After arriving in England, the 11th was redesigned a reserve battalion to provide reinforcements. Following a position as chief of staff in the 4th Brigade, Burritt went to France with the Imperial Forces. He was twice mentioned in the dispatches, received the Distinguished Service Order and was awarded the Croix de Guerre by the French.

When he returned to Winnipeg at the end of the war, he became a prominent civic leader, amateur sports executive and community humanitarian. He ran as a candidate on John Bracken’s Progressive ticket in the 1927 provincial election but lost. In 1938, he was appointed prison governor of Headingley Gaol.

Shortly before retiring as governor at Headingley, in 1945 he was selected to investigate the state of the Manitoba penal system. Following a riot at a women’s prison in April 1946, Burritt criticized administrative incompetence and lax standards. The unfavourable report became a point of contention in the provincial legislature as the opposition parties accused the Liberal government of suppressing the findings.