People here have quite a different opinion of the Canadians now. They want to have the Canadians in the fighting all the time. We are classed now among the very best troops.

Born in Mulmur, Ontario on 13 April 1869, Malcolm Alexander Colquhoun was a Brantford contractor and captain with the 38th Dufferin Rifles. In August 1914, he enlisted in Lieutenant Colonel Robert Hodgetts Labatt’s 4th Battalion. In command of “B” Company at Second Ypres, he was one of the only officers in the entire battalion to emerge unwounded from the battle. Describing the fighting to his wife, Colquhoun wrote, “To put it plainly, it was a perfect hell.”

Referring to the death of so many local men in his company, he asked his wife:

I wish you would extend my sympathy to all the bereaved ones at home as I will not get a chance to write to them all. Tell them I feel most highly honored in commanding such a brave lot of men. It nearly broke my heart to see so many of them go down. 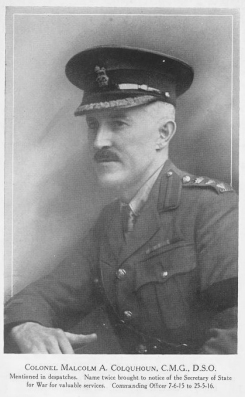 After the death of Lieutenant Colonel Arthur Birchall during the battle, James Ballantine assumed temporary command until the return of Labatt, who had been ill in England. Labatt stayed in the field for three weeks before he fell sick again and relinquished command to Colquhoun.

Colquhoun remained in command of the 4th Battalion for a year. He received the Distinguished Service Order and was granted furlough to Canada in June 1916. On his return to Brantford, he was welcomed home as a war hero and aided recruitment efforts for the 125th and 215th Battalions.

When he returned to England in 1917, Colquhoun was promoted to head the training brigade at Kimmel Park. He was in command during the rioting of restless and disaffected soldiers in early March 1919. Colquhoun attempted to calm tensions, asserting, “There must be no casualties in this business.” Nevertheless, several soldiers were shot in the ensuing violence.

During the 1920s, Colquhoun served as commanding officer of the Dufferin Rifles and was elected mayor of Brantford for one term in 1935. He died in his hometown on 3 August 1950.