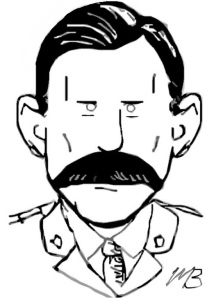 The Sixty-Fifth to the war are gone,
In the ranks of Victory you’ll find them;
The Land of War still on before
And the Land of Love behind them
“Canada,” cried the warriors hold,
The chains of still should bind us
‘Gainst duty’s call they would not hold—
Though we leave our hearts behind us.

Born on 4 August 1879 in Exeter, Ontario, Norman Lang was a farmer and rancher in Allan, Saskatchewan. The grey-eyed, moustachioed, six-foot-three Lang was a member of the 29th Light Horse and veteran of the Boer War. In April 1915, he was authorized to raise the 65th from the Saskatoon area.

Although the unit was absorbed and disorganized upon arriving in England, its former commander reverted to a junior rank to go to France. Lang joined the 2nd Canadian Mounted Rifles in February 1917. After several months in the field, he fell ill due to an attack of enteritis and appendicitis. Admitted to the No. 10 Canadian field hospital in early August, he was discharged to England. In September 1917, he returned to Saskatchewan.

In the House of Commons, Liberal MP for Saskatoon, George Ewan McCraney, praised Lang for being one of the only colonels who agreed to serve in France at the rank of lieutenant: “I am very pleased to have an opportunity of mentioning Colonel Norman Lang’s name in this connection. He is a personal friend of mine and it is altogether to his credit that he took the action that he did.”

During the December 1917 federal election, Lang contested the riding of Humboldt as the Unionist candidate against Laurier Liberal Joseph Leonard Brown. Lang won with 62% of the vote.The soldier vote was even more lopsided: 819 to 41.

In the House of Commons, he advocated for the repeal of the Wartime Elections Act, promoted western interests, and promised a “square deal” for all classes. Standing for re-election four years later, Progressive candidate Charles Wallace Stewart trounced Lang, who received just 7.5% of the vote.