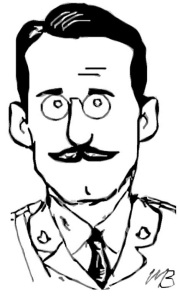 But the English and Canadians and Australians fight in a different way. They make a sport of fighting.

The German soldier has no sport. He is a machine; he is rigidly in his place. He can’t understand the idea that fighting is sport to the British. That long line of men charging, laughing and kicking a football along ahead terrifies him.

As president of the Sportsmen’s Patriotic Association, Richard Haliburton Greer proposed to raise a battalion of athletes from Toronto. Born on 19 October 1878 in Toronto, Greer was an Ontario Crown attorney and one of the city’s leading sportsmen. In his youth, Greer played amateur and semi-professional baseball. As a member of the University of Toronto ball club in the late 1890s, he was regarded as “one of the best short-stops in Canada.” In the 1898 UofT yearbook, Greer cited as his chief ambition in life: “To play the game.”

END_OF_DOCUMENT_TOKEN_TO_BE_REPLACED

I saw a mock funeral to day up to the 201 Batt they are being split up tomorrow, their Col. lost his job as they have less than 600 men. They dug a grave and buried a dummy representing their Col. They hated him, he was a whiskey soak, so on top of the grave they put a cross, a whiskey bottle, cig or some branches for flowers. Some reporters took a picture of it so likely it will be in the papers.

Edward William Hagarty was principal of Harbord Street Collegiate from 1906 to 1928 and  member of Orange Order Lodge No. 344. He was born on 7 September 1862 in Brantford, Canada West. He served four years with the Queen’s Own Rifles while an undergraduate student at the University of Toronto. An influential figure in the cadet movement for twenty-five years, Hagarty was selected to raise the 201st Toronto Light Infantry in January 1916.